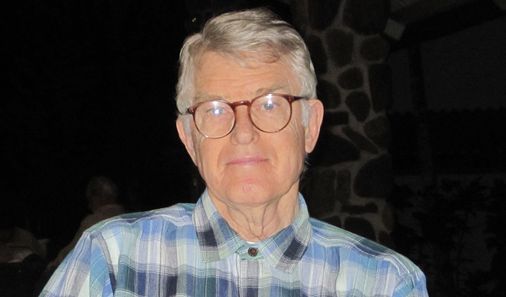 Mr. Springwho brought optimism and hope to Boston as a Federal Reserve Bank executive who worked to combat racial bias in lending, was 87 when he died September 3.

He had lived for decades in Boston, where he battled the aftermath of being hit by a bicycle courier in 1997 while crossing Commonwealth Avenue. The accident then left him in a coma for five weeks and compromised his health at the end of his life.

A look at the news and events that shape the day, delivered a few times a week with a side of humor and a dash of attitude.

“Bill Spring is that rare person for whom the war on poverty never ended,” Neil Sullivan, executive director of the Boston Private Industry Council, wrote for a 1999 gala honoring Mr. Spring’s work – a celebration who drew applause for his accomplishments from President Bill Clinton.

“Thanks to your vision and leadership, Boston’s businesses and public schools have joined forces to reduce the school dropout rate, improve student academic performance, and help young people make a smooth transition from school. to the world of work,” Clinton said. then wrote of Mr. Spring.

At the Federal Reserve Bank of Boston, where he was vice president for community affairs, Mr. Spring co-directed, with Constance Dunham, a historical study which highlighted the existence and impact of racial bias in city mortgages.

Mr. Spring, who was appointed to the Boston School Committee by two mayors, Raymond L. Flynn and Thomas M. Menino, also led the Trilateral Council for Quality Education and helped found the Boston Compact. This program’s innovative approach to curriculum, linking business leaders and heads of public institutions across the city, has been widely emulated elsewhere.

During his early years in Washington, D.C., he played a key role in drafting and approving legislation relating to the National Teacher Corps, the Comprehensive Employment and Training Act, and the School to Work Act, and he served on President Jimmy Carter’s domestic policy staff.

Friends said a lasting part of Mr. Spring’s impact was how he encouraged and guided others through their own careers in the legislative and executive branches of government.

“He’s been a great mentor to me and a bunch of others,” said Thomas Glynassociate professor at Harvard Kennedy School and former undersecretary of the United States Department of Labor.

Mr. Spring’s efforts were “never about Bill,” Glynn said. “It was always about work. And he was good at finding areas of compromise that people could agree on and crafting a bill based on those compromises and agreements.

In an email, author Doris Kearns Goodwin wrote that when she met Mr. Spring “in Washington more than half a century ago, I knew we would be friends forever. He was funny, smart, full of life, and oh how he could talk about the social justice issues that were so close to his heart! How fortunate we are that this public servant par excellence has settled in Boston, where his good works will live on for many years, as well as the inspiration he gave to generations of young people to strive to make a difference.

William Julian Spring was born in New York on July 16, 1935. His father was Dr. Julian William Spring and his mother, Lila Willard Spring Stanforth, was a nurse who remarried after Dr. Spring’s death.

Young Bill spent formative time at his family’s property in Colrain and graduated from high school in Manhasset, NY on Long Island where he developed a long-lasting passion for basketball. until adulthood. His jumps were legendary, friends said – nothing but the net.

Mr. Spring graduated from Harvard College with the class of 1957, but did not graduate for some time afterward because he was in basic Army training at the time of commencement.

Then he landed a job as a reporter in Milwaukee, mostly writing obituaries until he was called back to active duty during the Berlin Crisis. He wrote that he had done his part to defend Berlin “from the car park and tennis courts of Fort Chaffee, Arkansas”.

Returning to the paper, he began covering welfare and the civil rights movement before joining the staff of U.S. Senator Gaylord Nelson, a Democrat from Wisconsin.

In 1959, Mr. Spring married Grace Shenefield. Their three children are Cassandra Corcoran of Bristol, Vt., Joshua of Colrain and Abigail of Washington, DC The couple’s marriage ended in divorce and Grace died. in 2018.

The couple had two children, Silvia from Washington, DC and William from Needham.

“He was incredibly smart,” Micho said of her husband. “It was his intelligence that drew me to him, but it was his decency that made me love him.”

In all of his roles, she said, he had “this gift of being able to bring people together – with insight, a lot of respect and humor – and finding common ground where there didn’t seem to be any. have”.

A memorial service will be held at 3 p.m. on October 7 at Emmanuel Church in Back Bay.

US Senator Edward Markey, a Democrat from Massachusetts, marveled at Mr. Spring’s foresight. “I think Bill Spring saw the 21st century workforce 40 years before the end of the 20th century,” Markey said. “He saw the shift in education from tablets and pencils to tablets and pixels long before anyone else.”

“Bill was always on the right side of things and never, ever backed down,” said Cathy E. Minehan, former president and managing director of the Federal Reserve Bank of Boston. “He saw things very clearly – how education should be and how people should be treated.”

In 1999, Mr. Spring told the Globe that he “never did for money what I wouldn’t do for free. I really, deeply love public policy issues.

Sullivan, who was the city’s policy director in Flynn’s administration, called Mr. Spring “the intellectual forefather of the school-to-career movement.”

Throughout Mr. Spring’s life, even after the accident from which he unexpectedly returned, “the clarity of his core values ​​remained intact,” Sullivan said.

With his expansive intellect, Mr. Spring “could finish your thoughts for you and then explain the story of everything you saw,” Sullivan said. “And he was lyrical. You could listen to him and say, ‘Wow, what a sentence! Did he just say that? That’s absolutely correct. “

Bryan Marquard can be reached at bryan.marquard@globe.com.