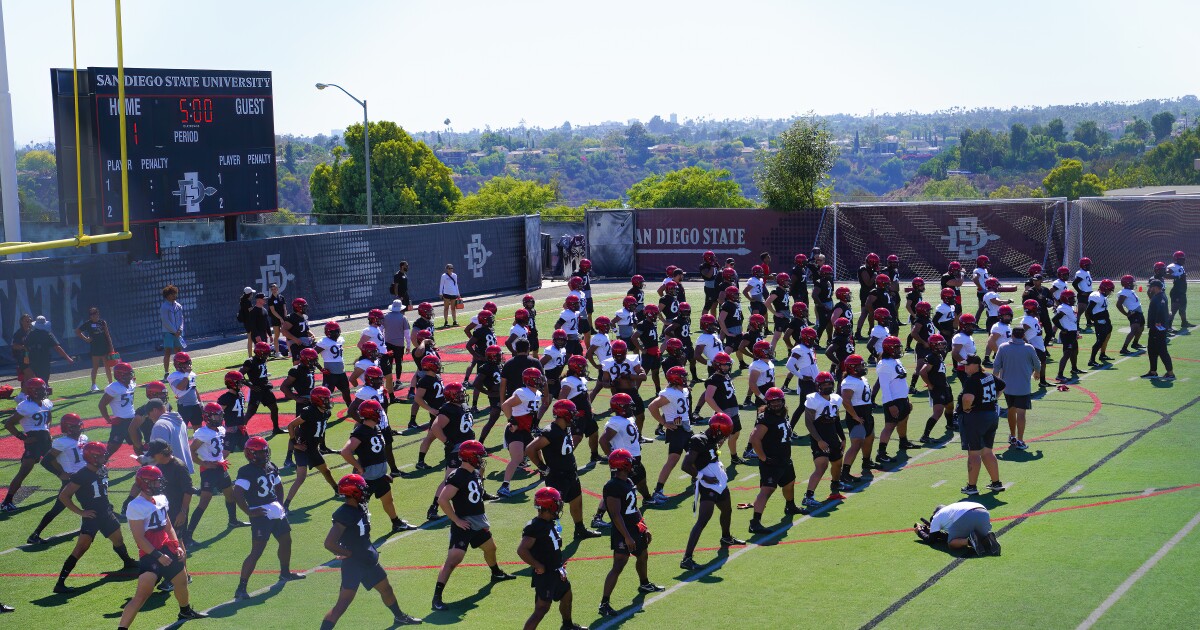 He’s a grizzled veteran, but San Diego State graduate senior linebacker Caden McDonald is welcoming the start of fall camp more than ever.

“It’s a blessing to be back here with all the boys,” McDonald said. “Doing six years of first days, that first day was the most exciting.

“You get older, you get more mature, you know what’s coming. …all the butterflies.

McDonald said the added excitement comes with the fact that it’s SDSU’s 100th football season, the Aztecs are set to make their debut at Snapdragon Stadium and, to top it off, younger brother Caden , a transfer from Washington, joined him in defense of SDSU.

Although several years have passed since arriving on campus, Caden remains aware of what it means to take the field for the first time for the 32 true freshman on this year’s roster.

“Coming out here on day one is a mess,” Caden said. “I remember what it was like to be there, trying to learn defense. So I have some pity for them.

“I try to help them. I’m not going to be one of those average guys all the time. I have to help them because we need everyone to win.

The first day is an opportunity to see the comings and goings, the progress made in the weight room and the dining room, the subtle and spectacular improvements.

“For a first day, there were some really good things,” SDSU head coach Brady Hoke said as he left the practice field. “It was amazing how part of the heat, part of the activity gets to some of them. They have to take care of themselves a little bit more. …

“It’s great to be back. It’s fun to be here. Like I told the guys last night, I love camp.

Added Hoke, whose team still have 20 training sessions before the start of the season: “We have a lot of things we need to improve on.”

The QBs wore green jerseys, as opposed to the black jerseys worn by other offensive players.

Sophomore Marshall Eucker (La Costa Canyon High), who was fifth on the depth chart at quarterback, is no longer an active player.

“He seems to be more of a coach than he’s playing right now,” Hoke said. “And he will be damn good at it. He’s a smart kid.

Freshman Tobin O’Dell, a Bishop Amat High substitute, was on the roster but not yet at camp.

Redshirt freshman offensive linemen Christian Jones and Josh Simmons were two of the most notable examples of the off-season conditioning program. Christian lost 30 pounds (350 to 320) and Simmons lost 25 pounds (330 to 305).

Graduated senior running back Chance Bell, who gained 15 pounds (from 185 to 200) of “good” weight, was among those at the opposite end of the scale.

Junior receiver Brionne Penny was among several players on Friday whose bodies reminded them to hydrate.

Penny went high for a nice side grab halfway through practice, coming back with the ball as well as a nasty right calf cramp. A few sips of water and he was back.

There were two players missing from the defensive line squad who are no longer on the team: senior Deven Lamp, a transfer from Tulsa, and redshirt rookie Pa’a Ewaliko.

Lamp decided not to return after continuing problems following surgery for a sports hernia. Hoke did not provide a reason for Ewaliko’s departure.