Spring of Discontent: Mexican Berry Pickers Strike for a Bigger Share of Profits

In a major agro-exporting region four hours south of the US-Mexico border, berry pickers went on strike May 28 to demand a bigger share of the profits they produce.

Over the next week, protests and strikes erupted at farms in the San Quintín Valley, a major source of berries, tomatoes, peppers and cucumbers.

A second wave of strikes began on June 30.

The first farm hit, Agrícola Fragaria, had refused payment of employee profit sharing (PTU), a constitutional requirement – the official calculation for 2022 was that 10% of a company’s profits should be distributed to workers.

Farmworkers have contacted the Independent National Democratic Union of Agricultural Laborers (SINDJA) to support the strike and negotiate on their behalf.

The strikes quickly spread to other farms in the valley. Farm workers picking strawberries and blackberries for Rancho Nuevo Produce stopped work on May 31 and gathered outside the fields with members of SINDJA.

Rancho Nuevo exports berries for Andrew & Williamson Produce under the Good Farms label for Whole Foods and Costco, where they are sold in cartons that say “improving farm-to-table life.”

Despite the farm’s long history of low wages and labor rights violations, the Equitable Food Initiative (EFI) certifies that its products are “responsibly grown, farmworker-insured.”

SINDJA general secretary Abelina Ramírez Ruíz said the strikes broke out because workers considered the amount of profit-sharing to be a “miserable” amount. For example, a small producer called Rancho Agricola Visoje paid between 20 and 60 pesos (US$1 to 3) per worker, for the year.

Agrícola Fragaria is owned by Felipe Ruiz Esparza Arellano, a medium-sized grower who exports strawberries to the United States with Fresh Pac International.

Workers went on strike in at least four of his fields to force him to comply with the law. To contain the spreading discontent, he sent all the remaining workers home. 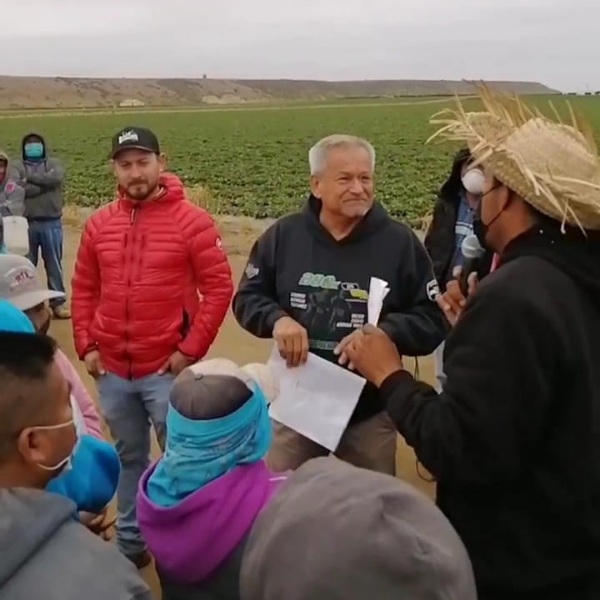 Confronted by the workers, Ruiz Esparza Arellano claimed he was not responsible for several of the farms the workers claim to run. Of the nine farms he operates, some are registered in his name and others in the names of his children. Farm workers were confused and frustrated by this lack of transparency.

‘OUT WITH THE CTM’

Mexican labor law requires employers to inform their workers of the profits generated each year and the amount of profit sharing to be distributed to each worker.

Yet, given the complicity of company-controlled unions signing sweetheart deals behind workers’ backs, this rarely happens.

One such employer protection union, SINTOIAC (affiliated with the Confederation of Mexican Workers, CTM), suppresses labor rights such as profit-sharing and freedom of association in Rancho Nuevo.

Many Rancho Nuevo Produce workers are members of the independent union SINDJA, but they face harassment and reprisals. The strikers chanted: “Out with the CTM”.

For decades, government officials have turned a blind eye to abuses by San Quintín growers. With pressure from strikers and support from SINDJA, however, this year has been different.

On June 2, representatives of the Baja California State Department of Labor (STPS) met with SINDJA, along with workers and administrators from Agrícola Fragaria and Rancho Nuevo Produce. However, the Secretary of State for Labor Alejandro Arregui Ibarra himself was not present.

Labor Department officials promised to create a special commission to investigate profit-sharing irregularities and to hold follow-up meetings in the near future.

Despite this progress, farmworkers expressed two concerns that remain. First, SINDJA saw the absence of the labor secretary as a lack of determination to protect their rights. In a statement, the union said the meeting was an “important step forward”, but acknowledged that it was called because of the strikes and not the goodwill of the government.

The second concern was that the labor department had held separate meetings with Rancho Nuevo Produce and the company’s union, SINTOIAC. 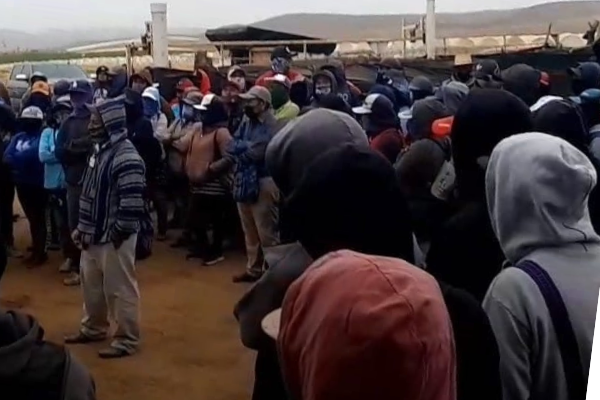 A small victory was won when Rancho Agrícola Vijose finally gave in to labor pressure and paid out between 600 and 2,000 pesos (US$30-100).

SINDJA pledged to continue the fight for “better working conditions, better wages, better benefits, [and] incorporation into the Mexican Social Security Institute, among other rights.

And on June 27, the labor secretary finally showed up to meet. Arregui Ibarra met with representatives of SINDJA and a delegation of agricultural workers from the San Quintín plantations.

He promised greater oversight of producers’ obligations to workers. However, he was reluctant to do anything about business protection unions, arguing that it was a federal problem.

Not content with these promises, the farm workers are taking matters into their own hands. New strikes broke out on June 30.

And the agricultural workers of Agrícola Vijose protested when all the workers were fired.

Many growers terminate contracts with farmhands at the end of the growing season, then rehire them soon after when the new season begins. This allows the producer to keep farm workers in a permanent temporary status and avoid paying profit-sharing and bonuses.

The recent strikes mark the first time in Mexican history that an independent union of agricultural workers has brought a state government to inspect systemic labor violations by producers. With each strike, SINDJA’s support base grows and the union gains membership.

It remains to be seen, however, whether the union can force local producers and international distributors to respect the rights of agricultural workers to organize and bargain collectively.

Note: Photographs provided by farm workers who wish to remain anonymous for fear of retaliation and blacklisting.

James Daria is assistant professor of anthropology at Georgia College and State University.