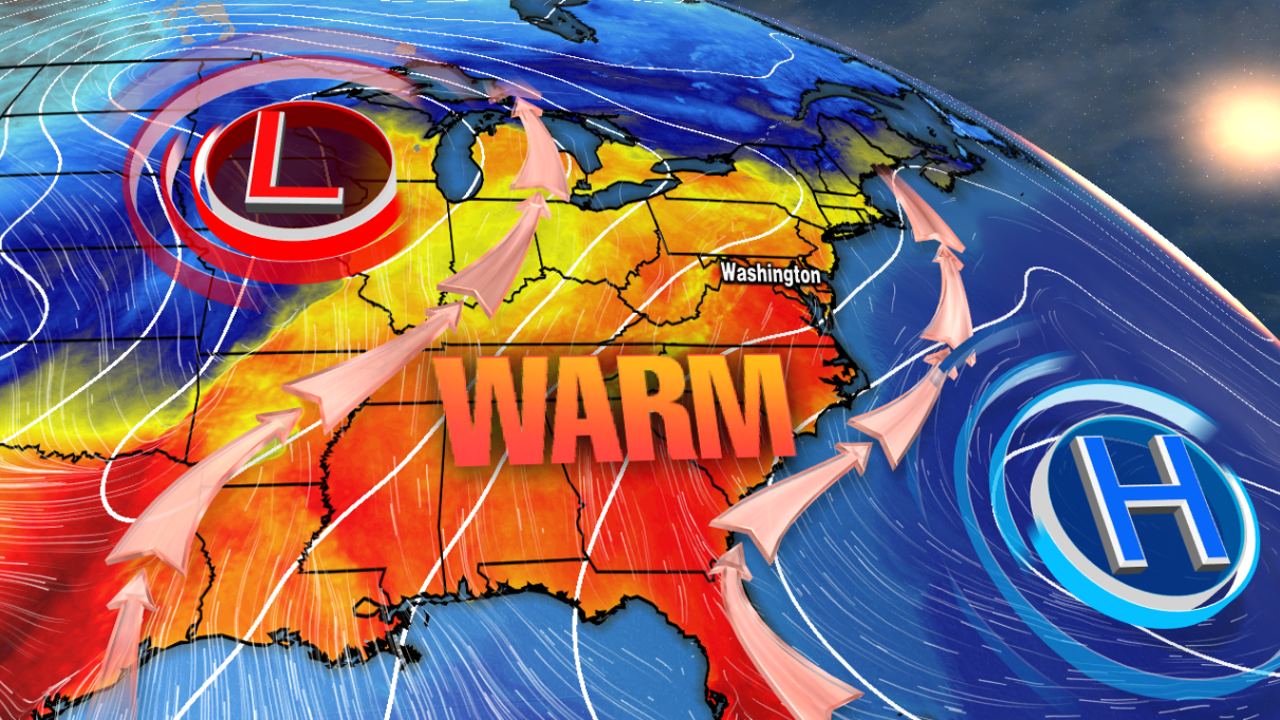 Spring heat is coming! But for how long ?

After another cold spring weekend in Washington where temperatures did not rise above the 50s, many in our area are tired of the cold conditions and are ready for the spring heat to set in.

Nor has the longevity of this cold snap been exaggerated, as only three of the previous seventeen days featured above-normal temperatures in Washington. We’re finally going to end that streak this week, with 70 and even some 80 days to come.

A strong storm system developing in the center of the country will work in tandem with a feature known as “Bermuda High” to promote mid-level southerly winds this week. These are important for a sustained warm-up. Unfortunately, it won’t be a totally perfect warm-up. Showers could again beautify our skies on Tuesday morning before the skies clear up and temperatures rise again in the afternoon. Wednesday and Thursday, the two hottest days of the upcoming heat spell, will also present the possibility of a few scattered thunderstorms. But right now, no day looks like a meltdown, and our extreme weather risks also look pretty marginal. 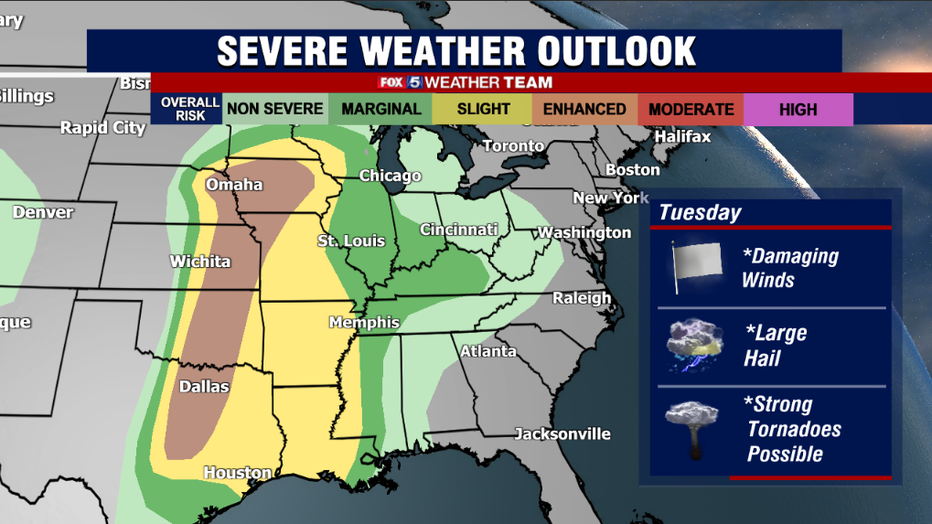 The same cannot be said for other parts of the country. The storm system that will contribute to our heat this week will fuel an intense outbreak of severe weather across the Plains and parts of the Midwest on Tuesday and Wednesday. Cool, dry air mixing with warm, humid air from the Gulf of Mexico and an intensifying jet stream is the recipe for another week of severe weather and tornadoes in this region. The fourth week in a row.

Although alarming, repeated chances of severe weather were also expected this spring, as we are currently in what is known as a La Niña spring. These are usually very active during severe weather, and our area may also have increased severe weather risks in May and June because of this. 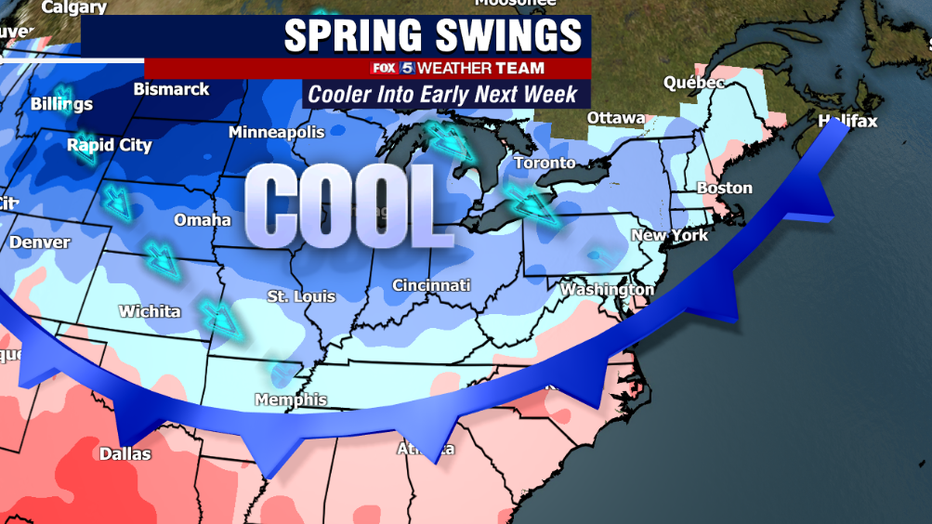 Fortunately, the storm system will weaken as it moves eastward through the end of the work week. The bad news is that after this cold front passes, our temperatures will begin to drop throughout the weekend. The lower 70s are expected to start over the weekend, but by Easter Sunday some parts of our region may again struggle to break the 60° mark. If this is not enough, the frontal border will stop just to our southeast.

Some disturbances will roll along this border, and the threat will be there for a few showers on Saturday afternoon with the threat of a larger rain event by next Monday. Right now Easter Sunday itself looks dry, but I can’t rule out the risk of introducing a few showers into this forecast as the week progresses. 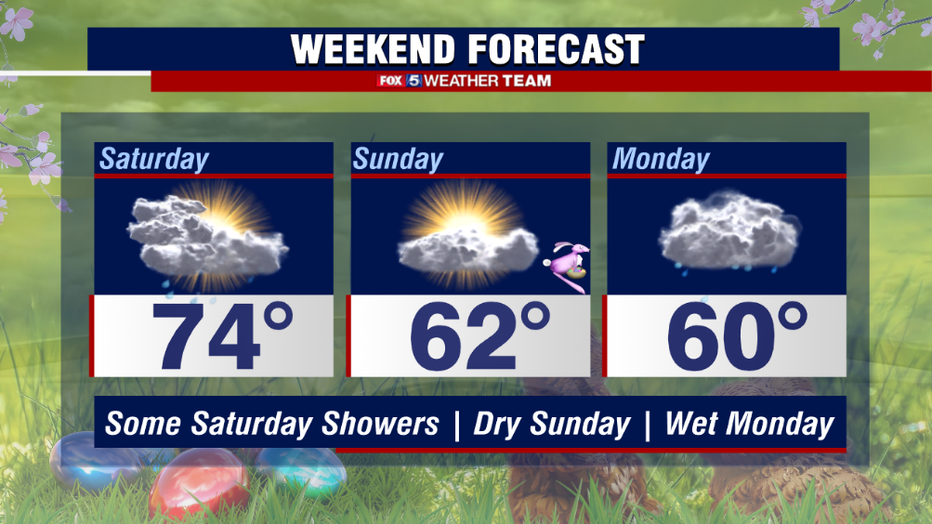 I’ve been getting a lot of questions about when I expect this pattern to loosen up, and if I’m anticipating a period of sustained, consistent heat. The short answer is that I don’t really expect this spring to be one where we “settle” into a cohesive pattern. I think we continue to cycle back and forth between well above normal and cooler than normal periods, with stormy periods in between.

This is typically what we see in these types of La Niña springs. What I will say is that over time the cooler hits should gradually become less intense at how cold they are. Seasonal normals are on the rise as our daylight continues to lengthen and the angle of the sun continues to rise in the sky. Average high temperatures in DC hit 75° in less than a month, and by then even a 10° below normal day still gets you into the mid-60s. So expect that as the “cold snaps” become less intense, but expect the pattern to continue to “sway” for the foreseeable future.