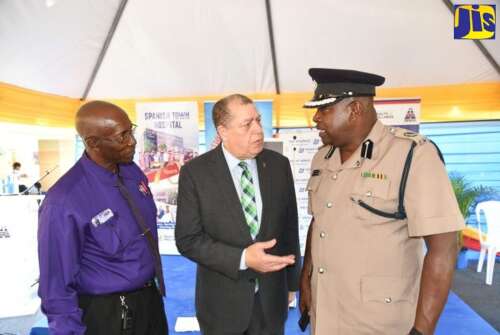 Several bus stops along Constant Spring Road to be restored

KINGSTON, Jamaica – Transport and Mines Minister Audley Shaw has pledged to restore several bus stops that were relocated during upgrades along a stretch of Constant Spring Road in St Andrew.

The affected area covers the stretch between Manor Park and Phil’s Hardware.

“Before the road was repaired, there were three or four bus stops. The road was later repaired and the bus stops were removed. And now when the buses stop, they get in trouble with the police. So, I had to make the commitment that we had to put the bus stops back,” he said.

The minister was speaking at a handover ceremony for three dialysis machines which were donated to the hospital in the Spanish town of Saint Catherine by the Transport Authority, in partnership with the National Health Fund ( NHF), Wednesday, September 14.

Shaw said the restoration of bus stops is necessary because public tourist vehicles coming from Stony Hill and surrounding communities with, among other people, pupils who attend nearby schools, will have to stop to let them off.

“Sometimes we too, as an authority, make mistakes, and we have to be honest enough to admit those mistakes,” the minister said.

“It’s not possible that the problems always come from our drivers and drivers. Where the problems are on the side of the government, we have to do something, and I make that commitment,” he added.

Meanwhile, Shaw praised Transport Authority inspectors who helped students get to school, citing their gesture as an example of “the thoughtful and committed approach the Jamaican government is taking to care of his people”.