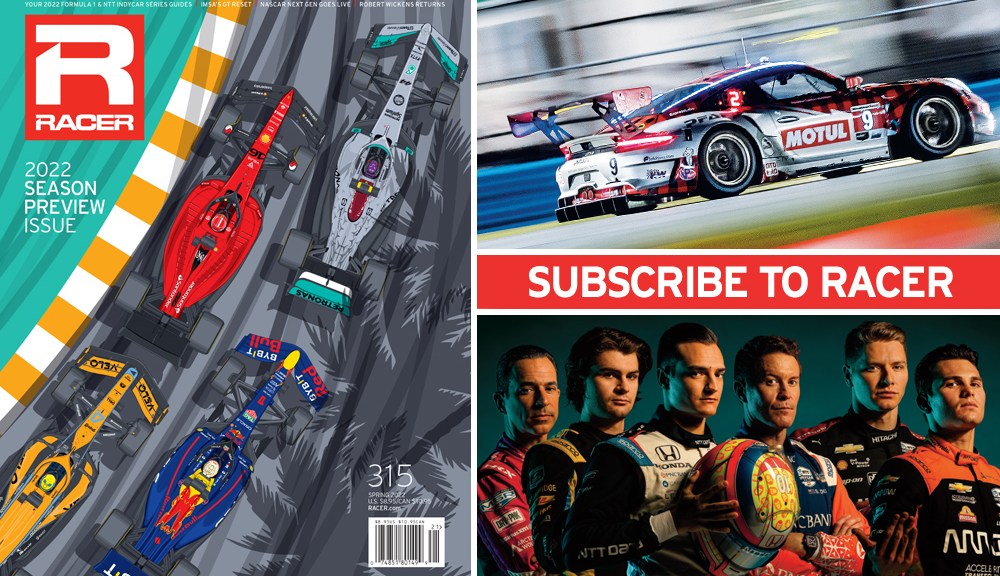 It’s that time of year when the latest issue of RUNNER magazine sets the stage for two of motorsport’s biggest championships, Formula 1 and the NTT IndyCar Series. The points go back to zero, the discussions are over, the tests are over, and now we see who has what it takes.

When we were done RUNNER No. 315 and sent it to the printers, we realized it was the words “re”: reset, refresh, regroup, flip, rearrange – and add a bit of “reject” and “remount”, well sure, this racing…

On the reset front, Formula 1 is introducing its new aero rules in 2022. The return of full ground effects and a simplification of the top surface aero appendages were formulated to help cars track and overtake, but the early signs are that it might shake up the status quo a bit too. Ferrari looked solid in pre-season testing, so the potential for a three-way championship fight, with Red Bull Racing and Mercedes, doesn’t seem out of the question.

The “reject” and “re-show” bit? On the first, it’s the F1 teams refusing (another “re” there) to add to the number of decisive sprints on the grid in 2022, and on the second, it’s the continuing tensions and game of blame Red Bull and Mercedes over last year’s controversy. Abu Dhabi final. Move on guys…

RACER 24-page F1 preview section, including features on Lewis Hamilton’s new team-mate George Russell and Ferrari title contender Charles Leclerc, sets you up for a season that promises to be fresh, unpredictable and, all fingers crossed, as hotly contested as the previous one.

The NASCAR reset is also in full swing. With a handful of Cup Series races in the book, the new Next Gen car looks up to the task. RUNNER followed 23XI Racing through the opening races of the new era and watched Bubba Wallace come within 0.036s of winning his first Daytona 500.

Cup Series riders find a handful of Next Gens, which is always good, and the race has been strong. The technical issues seem to be minor, so let’s call it a result (yes, another “re”).

In the NTT IndyCar Series, consolidation and refreshing has been an off-season theme, with major changes at Andretti Autosport and Team Penske. It is in the latter case that it seems to have had the most effect, with Scott McLaughlin’s victory at the St. Petersburg opener, a reorganization of IndyCar’s on-track hierarchy. It looks like we’re going to have a fascinating year ahead, and you can catch up with our 19 pages of stories, interviews, and all the facts and stats you could need.

The return? It’s Robert Wickens, back in a race car, and back to enjoy the challenges, the frustrations, the exhilaration and even the nerves that come with it. You can read more about the Canadian’s inspiring return with Hyundai in the IMSA Michelin Pilot Challenge in the new issue.

And RUNNER #315 continues, with a preview of the introduction of the new GTD Pro class of the IMSA WeatherTech SportsCar Championship, a preview of the 2022 SRO America season and an interview with reigning Yamaha MotoGP Champion Fabio Quartararo on prospects for repetition.

Click here to purchase the new issue of RACER. Would you like to have RACER delivered to your mailbox? Click here to learn more about print and digital subscriptions.