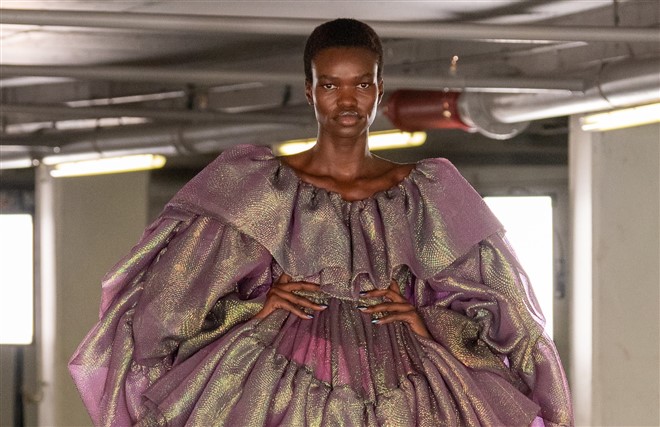 Fashion designer EDWARD CRUTCHLEY presented spring summer 2023 The only constant in life is change Collection as part of the ongoing London Fashion Week. For the season, Crutchley collaborated with Aron Alexandros De Vallier Petridis. Both were inspired by Proteus, the ever-changing, shape-shifting Greek god of the sea, who serves as a metaphor for the fluid queer community.

This fragment, attributed to Heraclitus of Ephesus, who, in his susceptibility to melancholy, will bear the title of “the weeping philosophy”, will serve as a bonus for our brief but collective stay. In the uncharted waters of change, it is impossible for a human to enter the same waters twice, as Heraclitus enlightens us:

The momentum begins to form:

How to reconcile these differences?

The ancient Greeks had a complex relationship with the ever-changing sea. While resource, source of power, the otherness of the sea, its changing unpredictability, its brute force and its indomitable will were feared.

At their core, many stories in Greek mythology deal with interpersonal conflict. The solution is often some form of metamorphosis. The liminal beings, endowed with the power of transition or change, act as bearers of resolution. Unlike humans, their very essence allows them to move through contrasting realms: the mortal and the divine. Earth and sea.

An example of this is Proteus (Πρωτεύς), a liminal being who not only inhabits but also embodies rivers and ocean water bodies. When revealed to the human eye, Proteus takes the form of the “old man of the sea”, when hidden he enjoys the epithet of (God of the) “elusive sea change”. And while he bears the gift of prophecy, in his reluctance to share it with humanity, Proteus’ form changes. Proteus will enlighten those who seek to know the one constant (which is change) only if they are able to catch it in the midst of metamorphosis.

His abilities live on in the English language. We always use the word “protean” to describe the ability to change intermittently and effortlessly. Kind of like fashion.

Perhaps the only way to coexist peacefully with change is to be protean ourselves.

Perhaps we will capture Proteus during our visit today.