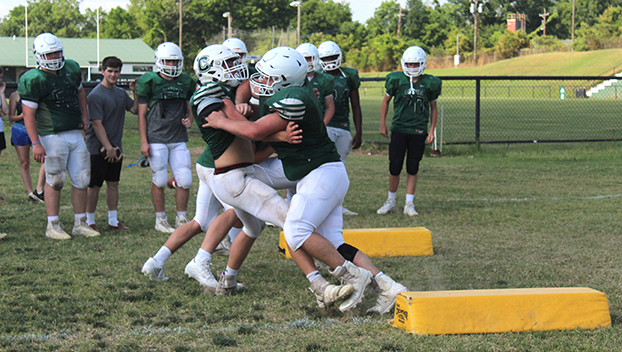 NATCHEZ — The Green Wave players joked and talked during a Tuesday scrimmage at the end of practice. Wright Graning paced 30 yards behind the ball shouting instructions to his defense while Chuck Darbonne pushed offensive players aside to give them instructions.

It was the fourth day of spring football training for the boys in green and white. Darbonne said he didn’t feel four full workouts at all.

Since Cathedral’s baseball team qualified for the playoffs and many members of the baseball team also play football, spring training this year started later than usual.

While Natchez, Vidalia and ACCS will have played spring matches, Cathedral hasn’t had time to set up a spring match. Darbonne said they plan to find a way to have competition, whether it’s an intersquad scrimmage or contest day.

“I don’t want to hurt anyone because we rush into a spring game. We have a few injuries where we want the kids to practice but not put them in dangerous situations,” Darbonne said. “We try to treat them in terms of injuries. We had around 50 players this year and we have a lot of competition.

Cathedral will lose seniors Tyler Gregg, Paxton Junkin, Harper Jones and Christian Wright upon graduation. They started in defense and attack, so eight spots are waiting to be filled by the underclassmen.

Darbonne’s hope is to push players to where they can specialize in a position and he won’t have to start as much on offense and defense. The team has more experience than last year as the upcoming senior class has 15 members.

Cathedral uses spring practice to facilitate competition between players. He said they mixed up the first and second strings in practice so everyone would get meaningful reps.

Before the start of spring training, the team had a meeting.

“We have strictly defined what we need seniors to be successful. They came and showed up. They train the younger ones the right way and the cathedral way. Hopefully we won’t rehash this next year and these kids will be ready to step up.

Fifteen seniors is the biggest senior class he has had since coaching at Cathedral, Darbonne said. It’s a close-knit group that appreciates each other, they have a constant relationship that fuels the competition.

The late spring training scrimmage at Cathedral is scheduled to take place on Tuesday or Wednesday next week. Whatever the day, it will be the last training.

During the offseason, Darbonne said his team had good attendance and was committed to the weight room. He saw a boost in confidence with the players. Some of the younger players aren’t afraid to challenge older, stronger players in training. He said half the battle in football is mental and they get over it.

The coaching staff rewards players who average all a’s for the year with breakfast at Go Mart’s Deli the morning before the finals. He said the award will inspire players not to be complacent in class and hopefully it will trickle down to the football pitch.

“I hope incentives like this will make them care about grades more regularly. It’s not going to be something they have to be begged to do,” Darbonne said. “They will want to make it important. It then trickles down to the rest of them. Many children have their habits at this age. We want to push them to their maximum potential.