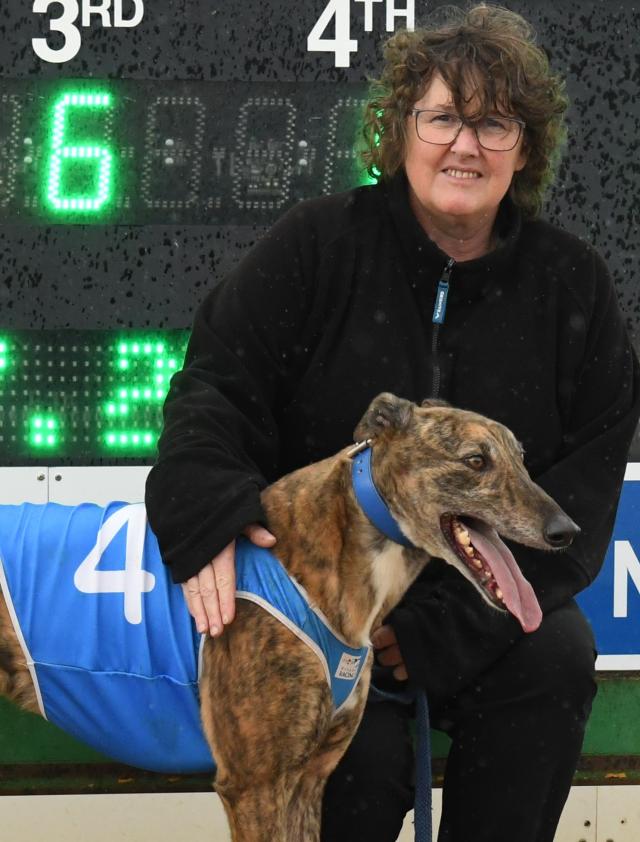 A colorful character, Tom Cryer and his wife enjoyed huge success at Tara Raceway with the offspring of Cryer’s Midget.

She won 11 races at the Mount Gambier track, with the majority of those wins taking place before the introduction of TAB races.

In total, more than 150 winners came from both litters – winners of star races and track record holders were also added for good measure.

For the Cryers, it was the start of a Sunday morning ritual.

A trailer loaded with greyhounds, breakfast in Penola, then a dog day in Mount Gambier where more often than not a winner or two would be forthcoming.

In 2018, Cryer purchased a puppy by Spring Gun from Grimsby Girl from Compton breeder Tracie Price.

Later to race as Cryer’s Spring, he was Coach’s last winner in a success at Tara Raceway on March 22, 2020.

Later that year, Nicole Stanley of Portland took over training the brindle dog for Margaret Cryer.

Cryer’s Spring victory last month in its 100th start was a nice touch, as was last Sunday’s victory in the Carlin & Gazzard MG Mixed Stake over 400 meters.

A winning farewell, if you will, for his former coach after leading all the way and holding off Phantom Call and Ashton Shintaro to score in 23.19 seconds.

It was his best day on the track since August 8, 2021 when Radioactive, Aston Shintaro, Hostile Savage and Daph’s Extreme came through.

Per My Redeemer of Raz’s Girl, Master Shameem was purchased as a puppy from Allendale East breeder David Peckham by Malcolm Keenan of Tarpeena.

“I had had bad luck with a dog from Raz’s Girl’s first litter, but when there was a blue puppy for sale from her second litter, I decided to try another time because I had always wanted a dog that color,” Keenan said.

“Later I had a little trouble finding someone to pre-train Master Shameem until Nifty raised his hand and said he would take him and train him too if I wanted to.”

Just his second start, the September 2020 calf led all the way into the Commercial Hotel Maiden Stake (400m) beating Storm Shelter by 2¼ lengths in 23.58 seconds.

Raced and trained by Lenehan, Ms Cameron led all the way into the Produce Store Maiden/One Win Stake (512m), eventually hanging on to defeat Blazing Beth – a litter sister to Adelong, winner of the next race – in 30.54 seconds.

“I thought it was a good run for her today, but she certainly did it well,” said a relieved Lenehan after the half-header victory.

By Lightning Frank, Mrs. Cameron is out of Fascinated, a 10-race Tara Raceway winner for Penshurst breeder John Cameron who negotiated a one-for-one breeding deal with Lenehan.

Having its fifth race after a seven-month break due to injuries and seasonal issues, Hostile Raven, owned by Queensland-based Jim Collins, picked up its first win since August last year in a big performance in the Swallow Drive Meats Pile (400m).

Settling into third place, the daughter of Hostile and Sweet Savage took over before claiming a five-length victory over Saint Ollie in 23.28 seconds.

A victory that pleased his coach.

“I think she did pretty well considering all the setbacks she had to go through,” Collins said.

“But, to be honest, I think his future now lies in breeding.

“She is very strong and has quite a practical pedigree.

“I still have to arrange the relevant paperwork with Jim, but he’s also keen to breed with her.”

Chasing back-to-back wins, leader Shimmy Sharna held on in a desperate finish to top Elarbee Mercury by half a header in the Bartholomew Pick 6 Stake (400m) in 23.42 seconds.

The wins came after she ran a close second at Glenville Rose on May 26.