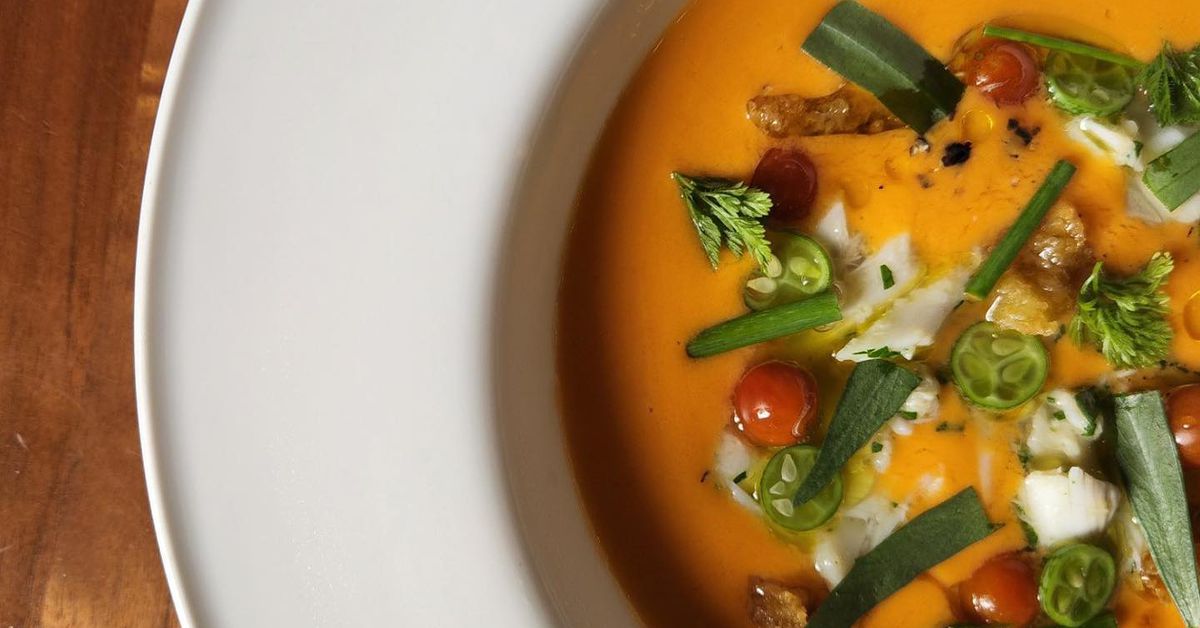 Welcome to Industry Talks, where Eater shines the spotlight on Atlanta chefs, bartenders, sommeliers and restaurateurs to offer a behind-the-scenes look into their world.

Food has always been important to chef and co-owner Brian So and his family. “My grandmother lived with us all her life and she always cooked every meal, every day,” he says. Her family often spent time around the dinner table planning the next day’s meal.

So he started cooking at home when he was in elementary school. It started as a hobby. “We ate Korean food at home,” he says. “I cooked pancakes, everything I saw on TV. If there was ever something I wanted to eat, something American, that interested me, I would tell my mother to go get the ingredients.

After high school, So enrolled at Kennesaw State University with no real goals or thoughts of a major to pursue. He says he held on for two semesters, but So’s love for cooking prompted him to leave college after his freshman year to work full-time in restaurants.

In her first real job at a restaurant, So learned everything from knife skills to how restaurants work, to the culture and how much work the industry entails. He then enrolled at the Culinary Institute of America in upstate New York and spent his weekends in New York trying to get into as many restaurants as possible.

“At that time, Eleven Madison Park was the biggest restaurant,” he says. “Everyone wanted to work there. Whenever possible, I worked there on weekends.

After graduating from culinary school, So moved to West Palm Beach to work at the Breakers resort. He soon realized that despite the quality and high standards of the restaurant, this type of cuisine lacked the creativity he craved. He found that creativity in San Francisco, working at Michelin-starred establishments like coi and Benu.

When his father passed away, So says he moved back to Atlanta to be closer to his family. He worked for a time under Robert Phalen at One Eared Stag in Inman Park and as part of Sobban’s opening team in Decatur. But he couldn’t get rid of the idea of ​​opening his own restaurant.

“Almost as soon as I got back to Atlanta, I had this thought in my head of wanting to do something on my own,” he says. “I ended up finding the right place in Marietta, very close to where I grew up.”

Spring opened in 2016 just off Marietta Square, ticking all the boxes, So says. It’s a small, manageable space and didn’t require a full build to open. His family still lives nearby.

At Spring, So favors simplicity, not just on the plate, but throughout the restaurant and on the wine list, which is overseen by his partner and sommelier Daniel Crawford. “We just let the ingredients we get be themselves and shine on the plate,” says So. It’s a formula that works. Both Spring and So have received numerous accolades over the past six years, including James Beard Award nominations and perennial spots on numerous lists touting Atlanta’s best restaurants, including Eater’s 38 Essential Restaurants. Atlanta.

After six years at the helm of Spring, So says he continues to focus on maintaining the high standards the restaurant is now known for and nurturing a new generation of Atlanta chefs and independent restaurateurs. He reminds diners in Spring that restaurants still need their support, even after reopening after weeks of dining rooms closing and months of creating take-out menus at the height of the pandemic.

“We don’t get rich here, we just try to survive. People want to forget about Covid and move on,” So says. “But the cost of doing business has skyrocketed since Covid. Even though it seems like everything is busy, people are still struggling, and it’s still a tough time for restaurants and the entire restaurant industry right now.

The answers below have been lightly edited for brevity and clarity.

Who inspires you as a chef?

I find a lot of inspiration from older chefs, chefs from the generation before me who have proven they can make it work for a very long time. This is not an easy task. If I had to name anyone in Atlanta, it’s Gerry Klaskala at Aria. He has become someone I have admired for how long he has been cooking at such a high level and has been able to keep his business running for so long.

Favorite meal outside of clock hours

In winter, I really like to do Korean jook. It’s Korean porridge with chicken – there’s rice, chicken, and lots of garlic. The dish is super simple and comforting and hearty and affordable. When I cook at home, it’s all about minimizing dishes and mess. I eat a lot of fruits, salads and vegetables. I make a lot of buttery pasta with good parmesan. It sounds boring, but to me it’s really comforting.

For a good seated dinner with full service and good wine, I really like The Chastain. Like Spring, they keep it simple and everything they do is very satisfying [and] performed at a high level. I recently had a very good meal at Talat Market. It’s nice to see the next step in the evolution of ethnic cuisine and how it is perceived and the level of service they offer and the quality of ingredients they use. Aria for special occasions. On Buford Highway, it’s Pho Bac [and] Yet Tuh.

If I had to travel anywhere, I would go to LA right now. Over the past three years, it’s become a foodie destination, as far as the United States is concerned. I would really like to find out all the major players there, Republic and Manzkeeven just Koreatown and all the Asian food in LA.

What are your future restaurant projects?

We have a few ideas for maybe venturing into another restaurant, but it really depends on the space available. Our philosophy has been to not rush anything. If something comes up organically and naturally and it works for us, we’ll take that opportunity. Our main focus is spring longevity. We are in no rush or rush to branch out and do something else.

What more do you want to see from the Atlanta food scene?

In recent years, we’ve seen a big boom in young, creative chefs opening their own restaurants with fairly small budgets and jostling to make it work. It’s good to see that there are plenty of young chefs in Atlanta ready to take the plunge and add to the culinary scene here. I just want it to continue because it makes things more interesting.

The most underrated chef or chef to watch in Atlanta

hock [Stieber] at Little Bear. Not that he’s underrated, but I think he has the right mindset to approach his business and his restaurant. I’ve had several great meals there, and if that’s the type of food he does in just a few years after opening his restaurant, I’m really excited to see how the restaurant is evolving. Same with Parnass [Savang] at the Talat market. I have already seen a lot of progression in service and execution of everything from my first to my second to my third visit. If he continues to progress like this, the sky is the limit.


Register to receive the newsletter