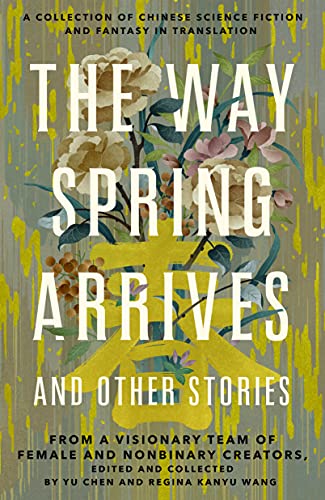 By now, many of us are already gearing up for the 81st World Science Fiction Convention next year in China. So it’s the perfect time for an anthology like The arrival of spring and other stories to hit the shelves and keep us going until 2023.

Although Chinese publishers have been actively translating and publishing Western speculative fiction for decades, the brilliant work emerging from China has only recently begun to claim its rightful place with major English-language publishers and among fans. The arrival of spring and other stories treats us of a lot of stories (alongside five essays, all of which add depth and context to the story and state of speculative fiction in China), and a real delight is that all 17 are written, translated and curated by female-identified, non-binary writers and editors. For those of us who may not fully grasp the significance of this, Yale Professor Jing Tsu’s essay on “The Future of Genres in Chinese Science Fiction” is worth reading in first, before diving into one of the stories.

There’s no easy way to characterize the range of work presented here, other than to say that the prose, uniformly, is elegant, with a lyrical flair that speaks to the work of the writers and translators. It’s not an easy one-sitting anthology; it is a hearty and rich meal, and it must be savored. I tried to read a few stories in a row, and even being a voracious reader, I couldn’t do it without feeling overwhelmed.

Honestly, there isn’t a honker in the group either. There are stories that I felt were remarkable – which I will mention – but each story was strong. Even the ones I liked less still liked me a lot for one reason or another, beyond the luscious tongue; for example, if ”The Restaurant at the End of the Universe: Tai-Chi Mashed Taro” by Anna Wu, translated by Carmen Yiling Yan was not among my favorites, it was a wonderful conversation with the eponymous piece by Douglas Adams, with a nod to Adams’ style and dry wit.

Most notable to me was a short film, “What does the fox say?” Of the various pieces, this one stood out – not just in length, but in that the piece itself was a conceptual exercise in thinking about language, translation, and where/how artificial intelligence intersects with these human constructs. It’s a rare concept piece that succeeds as a readable and enjoyable experience and story, and this one manages both. It was written in English by Xia Jia, who published in Chinese and English (also as Wang Yao). I am aware that much of its appeal to me is more written than read; the craftsmanship, circular structure and economy of language are marvels, examining history for craftsmanship. But it’s also a fun read and a fresh perspective on how language works.

The opening story, “The Stars We Raised” by Xiu Xinyu, translated by Judy Yi Zhou, stuck with me for quite a while after reading it. The strange phenomenon of the play, which includes our world suddenly populated by tiny harmless “stars” (which children play with and eventually turn into a profitable industrial raw material), is very little explained. His world-building is down-to-earth, a backdrop against which a very tender and understated Bildungsroman unfolds. It’s sad and sweet, with an ambiguous ending that still manages to satisfy.

A third star is ”Baby, I Love You” by Zhao Haihong, translated by Elizabeth Hanlon. It’s one of the simplest tales in the volume, in which a developer is persuaded to have a child in real life, in order to help him create a more realistic holographic game that simulates parenting. Of course, the situation is more complicated than expected, because real children – and real families – are messy, and ultimately irreplaceable by any game, no matter how well designed. The story, however, delves into the complex issues of whether or not one wants to have children, whether someone should focus on their career rather than their family, how someone finds meaning, and the emotional costs of these kinds of life decisions. It’s a nice exploration of those questions, with an added layer seen through the prism of a culture that, from 1980 to 2016, placed strict legal limits on population growth and families with more than one child.

Globally, The way spring comes is both an important and enjoyable anthology, bringing a cohort of extremely talented writers to a wider audience. Recommended without reservation.

Caren Gussoff Sumption is a writer, editor, tarot reader, and marketer living outside of Seattle, WA with her husband, artist and data scientist, chris sumptionand their ridiculously spoiled cat-children.

Born in New York, she attended the University of Colorado, the School of the Art Institute of Chicago, Clarion West (as an Octavia Butler Fellow of the Carl Brandon Society), and the Launchpad Astronomy Workshop. Caren is also a Hedgebrook alumnus (2010, 2016). She began writing fiction and teaching professionally in 2000, with the publication of her first novel, Homecoming.

Caren is a big fat feminist pooper of Jewish and Roma heritage. She likes serial commas, quadruple espressos, knitting, the new golden age of television and overanalyzing things. Its annoyances include ear infections, black mold, and raisins in oatmeal cookies.

This review and others like it in the April 2022 issue of Place.

While you are here, please take a moment to support Place with a one-time or recurring donation. We rely on reader donations to keep the magazine and site running, and would like to keep the site paywall free, but WE NEED YOUR FINANCIAL SUPPORT pursue quality coverage of science fiction and fantasy.

©Locus Magazine. Copyrighted material may not be republished without permission from LSFF.