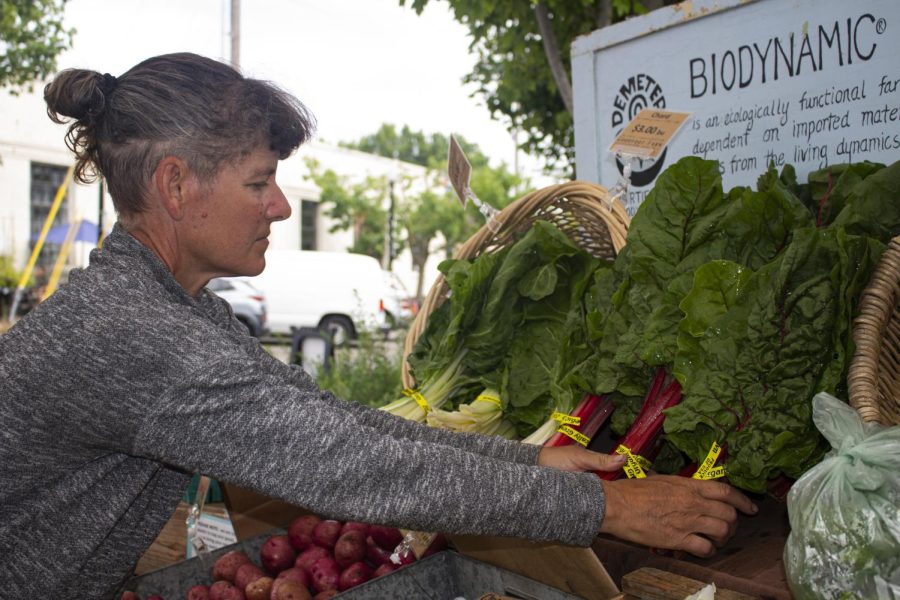 Farmer Beth Hoinacki of GoodFoot Farm takes stock and takes inventory of organic produce July 16 at the Farmer’s Market in Corvallis, Oregon. GoodFoot Farm is certified in biodynamic and organic farming practices and is self-labeled as a diversified vegetable farm.

After an unusually wet and cold spring, signs throughout the Corvallis Farmers Market warn of possible delays and shortages of produce.

Many vendors described difficulty adapting to the unpredictable weather experienced throughout the Willamette Valley. For Chad Shinn, owner of Camron Ridge Farmstead, the steady rains and cold temperatures earlier this year made it extremely difficult to plant some crops on time.

“Really, the rain is affecting our succession planning,” Shinn said. “Succession planning for us, as you know, we will be planting beets every three weeks. We could miss one. We risk missing two. So there will be a gap. »

Spring temperature fluctuations have resulted in crop losses for some farmers. According to Aurora Ashkar, market manager for Corvallis Farmers, the early spring heat drove flowering, which was then halted when temperatures dropped into the 30 degree Fahrenheit range.

Beth Hoinacki, owner of Goodfoot Farm, suffered similar losses in her own fields due to weather conditions.

“It definitely reduced our early season crops,” Hoinacki said. “We weren’t able to get into the fields when we usually do, and so a lot of the work we do at the start of the season, like starting the plants in our propagation house, these had to be discarded because we didn’t have the ground to plant them, for example.

Although the wet spring took a toll on many vendors at the Corvallis Farmers Market, they were still able to adapt or even take advantage of the unique situation.

Tal Singh, co-owner of Riverland Family Farms, is one such farmer. According to Singh, this year was positive compared to the previous one, as his tomato plants suffered from the 2021 heat wave.

Singh benefited greatly from the fact that 12 of the 20 acres of his farm were covered in circle houses, also known as high tunnels. These structures protected his crops from heavy rains and the cold outside.

“We’re probably a month and a half behind the growing season for us because we’re really just a small family farm,” Shinn said. “We have some high tunnels; you know, without the big tunnels, we would have practically no income at the beginning of the year. In fact, we’re just starting our year where we would normally have been here in May in terms of the volume we would normally have.

For Hoinacki at Goodfoot Farm, growing a variety of crops that can survive in different conditions has helped mitigate weather-related losses.

“We try to balance that [the losses] by being diverse so it’s not just one piece,” Hoinacki said. “For example, with our fruit tree orchard, we won’t have Asian plums or pears this year due to late spring frosts, but we will have apples. Because we don’t depend on anything for our overall season revenue, everything works.

Outside help was also a factor in getting the farms to where they needed to be this season.

“We had a lot of really great volunteer help in late spring and early summer,” Ashkar said. “Once things started to dry out to get that push to put everything in place and get us back on track for the rest of the season thanks to the students.”

Although the 2022 growing season has brought various challenges so far, farmers like Hoinacki are cautiously optimistic as the heat of summer approaches.

“It looks like we’ve slipped into our predictable summer in Oregon, but that could change,” Hoinacki said. “I think the feeling is that it’s just been everywhere, and who knows? Right now it feels like it’s where it’s supposed to be, but we also feel like we could have a terrible fire season like we did a few years ago.

The Corvallis Farmers Market on First Street is open from 9 a.m. to 1 p.m. Wednesdays and Saturdays until November 23.