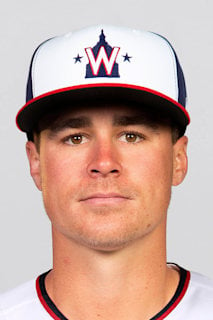 WEST FARGO, N, D. — West Fargo’s Andy Young has a new home in MLB this season with the Washington Nationals after spending the last two with the Arizona Diamondbacks.

Young was fired a day before the league lockout in December, leading to his name being entered into the Rule Five Draft where he was picked third. Young spent time with the D’Backs and in Triple A with the Reno Aces.

In 91 major league at-bats, 58 have come as a pinch hitter. One part of the game has remained consistent, the power bat.

Young bombed seven home runs and 21 RBIs in the bigs. 32 in the minors while playing four different positions. Young has more opportunities to shine in busier places, which Young looks forward to.

“I’m playing third and second and now that there’s a universal DH, I think offense might be a little more valued in the league,” Young said. “I just want to continue what I’m doing and have it on a bigger scale with more bats. You’ve just snacked and piled on good days. Once the games start, you try to make a good impression on the big league staff, especially the ones who haven’t seen you much.

Young is in a major league camp and is looking to make the 40-man roster. You’ll hear more about him on Sports Extra Friday.