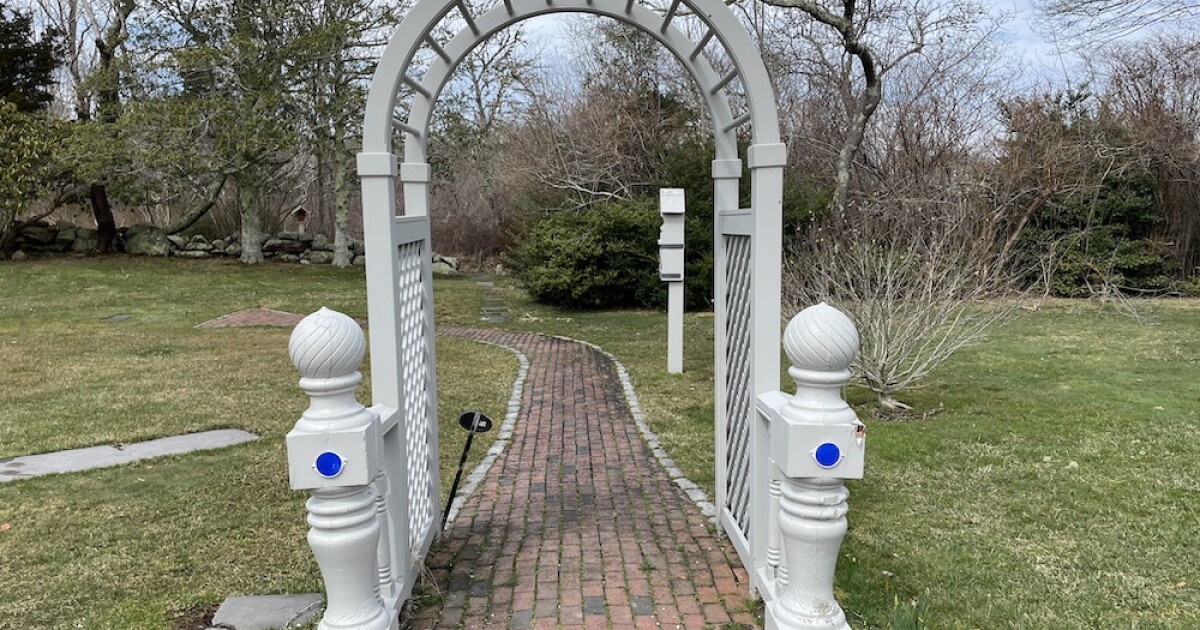 On the first day of spring, I went to fetch him from the garden of St. Mary’s Episcopal Church.

Mid-March, I’m pretty desperate for any sign of spring on Cape Cod. I feel as worn as the burnished Christmas wreath on the neighbor’s front door. Oh, I can ride through the November darkness and even handle three months of winter. But by March, damn it, I want spring. I appreciate the occasional 60 degree days and the tenacity of snowdrops and crocuses, but I know there are still several weeks to go before the big show of yellow daffodils and forsythia that brings joy to those gray days of April which never seem to exceed 44 degrees.

St. Mary’s Garden is a small oasis tucked away behind the church on Route 6A in the village of Barnstable. It’s worth stopping at any time, but it’s known for its daffodils, which are scattered in clusters along the paths and beckon you to stroll, in search of the next batch. In fact, the church has traditionally held its annual Daffodil Tea in mid-April, but this is still on hold due to COVID.

The garden has grown over the years since its conception and creation in the late 1940s by the Reverend Robert Wood Nicholson. Neighbors and parishioners have contributed plots of land, not to mention their time and gardening skills, and many are memorialized or even buried in a quiet garden creek.

The garden also has several beautiful non-horticultural details. When a church renovation unearthed the foundation stones of an old tavern on the site, they were used to build a stone wall. Arnold Geissbuhler, the famous sculptor of Dennis, created the cornucopia of the small basin and the statue of Saint Fiacre, the patron saint of gardeners. My favorite detail is a woodcarving of Harriet Stockton Worthington: an aging English gardener about 8 inches tall in his boots and slouch hat. He bends down to prune his grapes, looking almost as gnarled as one of his vines.

The Sainte-Marie garden is open daily from dawn to 6 p.m., and even dogs are welcome. A sign encourages visitors to approach with gratitude not only for the garden and its gardeners, but for all of God’s creation.

It was easy to feel grateful on a warm first spring day. A stand of yellow crocuses had grown through the moss. None of the daffodils were blooming, but their strong stems showed promise. A rhododendron the size of a van was swollen with buds. And the skunk cabbage, with its green and purple cap, was making gangbusters in the wetlands.

By the way, the cap-like leaf of skunk cabbage is called a spathe, and it surrounds a fleshy spike of petalless flowers called a spadix. When the spathe opens in the spring, it attracts pollinators like flies and weevils. Although skunk cabbage — named for its less-than-pleasant smell — doesn’t produce glorious blooms, it’s as sure a sign of spring on Cape Cod as ospreys, peepers, and wearing flip-flops with your cotton vest. down.

So I would say that my mission to find spring has been accomplished. Of course, there was that moment of mismatch when I thought of the spindly daffodils in my own yard and the perennials waiting to be put away. But I sat for a while and was grateful for a lot of things, especially that spring always brings hope, and in a world that seems to have gone crazy right now, that people took the time to create this little pocket of peace.

2022-03-29
Previous Post: The arrival of herring marks the start of the spring fishery in Alaska By LAINE WELCH
Next Post: UCLA Football: Bruins Spring 2022 Preview – AthlonSports.com