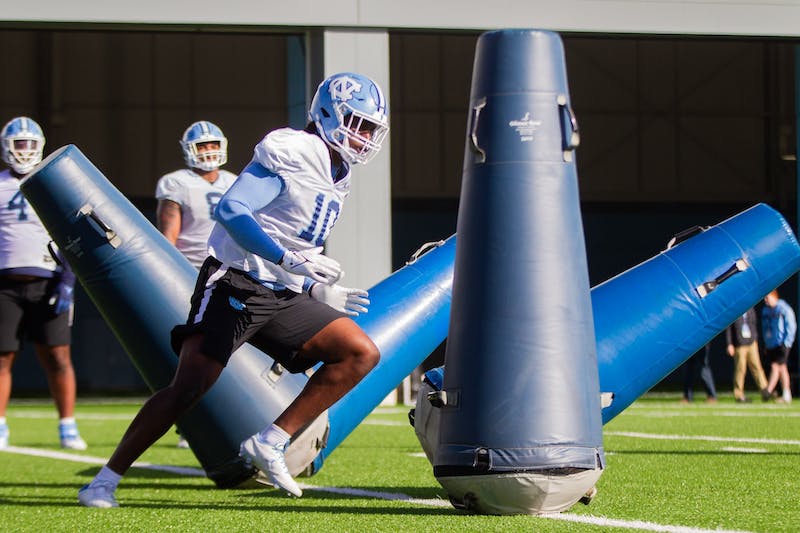 Similar to UNC’s men’s basketball, the soccer team will also have some new faces in the spotlight during its next round of spring training.

From players to coaches, UNC football is in a period of transition after high expectations took the program to new heights. Although last season’s 6-7 result was disappointing – considering the team had reached the Orange Bowl the previous year – the Tar Heels’ roster was nonetheless full of talent.

But the players are leaving, which means many of those stars won’t be wearing Carolina blue this coming season. Some of those notable names include former quarterback Sam Howell and linebacker Jeremiah Gemmel.

As they prepare to take on new roles and make their first impressions, here are three things to watch out for when the Tar Heels take to the court this spring.

Nowhere on the team will there be more personnel changes than the offense. UNC is firing just five starters — specifically offensive linemen and three receivers — leaving significant gaps in the running game and quarters room.

Finding Howell’s replacement is high on the Tar Heels’ roster, and the battle for the starting job between sophomore Jacolby Criswell and redshirt freshman Drake Maye will heat up in the coming weeks.

The Tar Heel faithful got some glimpses of each quarterback’s abilities during some of the team’s explosive games last season. Both Criswell and Maye are exceptional passers and should have no problem fitting into an explosive attack that thrives on big plays. Both also showed flashes of mobility, and their running abilities will be invaluable for an offense that often relied on Howell to play with his legs.

But none of that matters without a strong offensive line.

After three years at UNC, former offensive line coach Stacy Searels is back in Georgia, where he did the same job from 2007 to 2010 under former head coach Mark Richt.

Searels’ offensive lines at Chapel Hill have been crucial to the attack’s success over the past few years. They protected Howell for the most part and created lanes for some of the best racing seasons in program history.

Jack Bicknell Jr. is expected to replace Searels, but won’t have big names like Joshua Ezeudu and Jordan Tucker to pitch. This spring will test whether he and the new faces on the line can anchor the offense and get it where it needs to be in the fall.

While the defense didn’t lose many key starters and reserves from last season, it did lose its two leaders, including Gemmel and Tomon Fox, as well as veterans Trey Morrison and Kyler McMichael.

For a defense that didn’t have an ideal season last year, this spring is crucial in determining who will replace those names and provide veteran inspiration for the talented, but still developing, unit.

Luckily for the Tar Heels, several guys are able to fill the open leadership roles. After deciding to return to the team, look for graduate Raymond Vohasek to bring experience and energy to the defensive line, as well as junior Cedric Gray to transition smoothly to linebacker.

There’s also junior defensive back Storm Duck, who is looking to stay healthy and have a good season, hoping to get drafted in the near future.

With a recruiting class full of highly touted prospects, don’t be surprised if one or more of the early registrants makes an immediate impact this spring.

At 6-foot-5 and 360 pounds, five-star Travis Shaw will compete this spring with defensive linemen. Shaw was perhaps head coach Mack Brown’s biggest pitch of the recruiting season. He was ranked the fifth-best player in the nation and No. 1 in North Carolina by 247Sports, Rivals and ESPN.

Zach Rice is another big-time five-star looking to make an instant impact on the offensive line. The 6-foot-6, 315-pound tackle was ranked the ninth-best player in the nation and has strong prospects given the open spots ahead of him on the depth chart.

To get the day’s news and headlines delivered to your inbox every morning, sign up for our email newsletters.