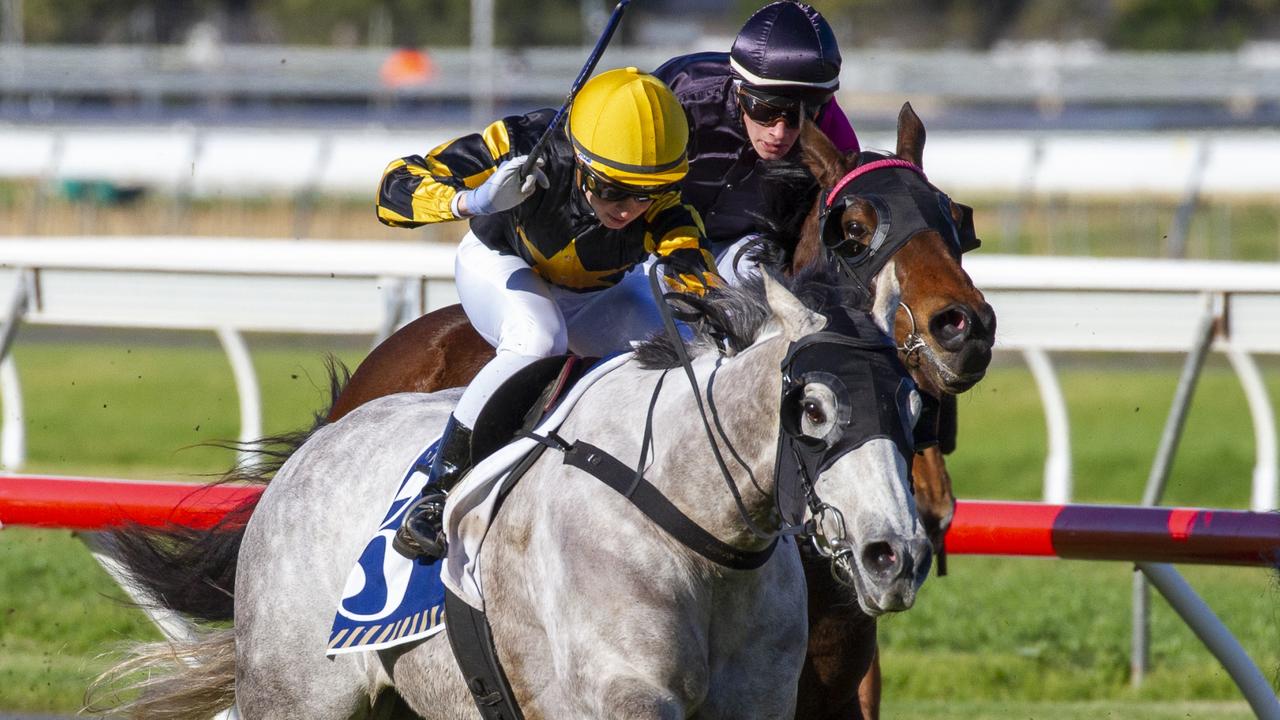 Trainer David Jolly celebrated the Group 3 $127,250 Spring Stakes winner’s header as many expected, but it was his second-string fancy Calypso Reign ($13) that took the win at Morphettville Saturday.

Behemoth, the well-backed $2.70 Jolly runner who has won three Spring Stakes in a row, bombed the start and finished 11th – casting many doubts on the stable’s perseverance with a campaign in Melbourne in the spring .

But while there were a lot of worries about Behemoth’s outcome, Jolly was thrilled with Calypso Reign and star jockey Kayla Crowther.

Ridden a patient run by Crowther, the winner trailed the progressive Pindaric ($7.50) by just two lengths with Pimm’s Party ($14) in third money.

But while the Grand Syndicate team, which was sponsoring the race, celebrated, Jolly took a few minutes to absorb what he had just seen.

Jockey Paul Gatt is believed to have hit his head on Behemoth on his last outing from the gates, Gatt has ruled out riding for the rest of the day.

Jolly said he wanted to test the waters with Calypso Reign who has now racked up eight wins and six placings in 26 starts.

He was also considering whether to proceed with a trip to Melbourne for Behemoth.

“Calypso Reign is a progressing horse, he surprises me all the time. I told some of my staff that we might have a chance to do some of the best races in Adelaide because he’s gaining weight up there and that was the one we wanted to try,” said Jolly .

“He obviously did really well. Kayla made such a smooth run and I told him not to worry too much about covering extra ground, as long as he could let it go.

“It’s too early to say if we’ll go to the Memsie (Stakes) until I look into things.”

Pindaric backed up trainer Michael Hickmott’s high opinion of his charge with a second-place finish, while Pimm’s Party were formidable in third-money.

Top trainers Richard and Chantelle Jolly were quick on the board when Alpha Flight ($1.50) made short work of a 3-year-old Benchmark 62 over 1100m in the opener, leading all the way to beat Bonnie Gangster ($26) and More Reward ($8.50). Ridden by Ben Price, the winner collected two victories and three classifications in five starts.

Former New Zealand galloper Born To Run ($6) picked up his first local win by beating debutants Commander Meroo ($4.80 EF) and Richana ($5) in a first 1100m. Ridden a patient run by Ryan Hurdle just off the pace, the John Hyam-trained rider had finished second in his previous two races before his success.

Ichibansan ($6) kept pace and it proved a winner for runner Leon Macdonald/Andrew Gluyas in a Benchmark 76 over 2000m. Discreetly ridden by Jason Holder, the winner took over on the straight to stand up to Miss Gobcain (3.80F) and Silent Command ($18).

Caitlin Jones’ affinity with the Ken Sweeney-trained Zarace ($3.90) continued when he earned his second straight win with Jones on board, earning a Benchmark 68 over 1050m from Kong ($6) and Tanja’s Dream ($11).

Next Dimension ($20) was another horse to beat a long run of outings when he won a Benchmark 68 over 1200m, hailing judge first for the first time in 54 weeks.

Trained by Paula Trenwith and ridden on a patient run by Jess Eaton after trailing far near the turn, winner represented Deevine ($8) and early leader Solar Gale ($16).