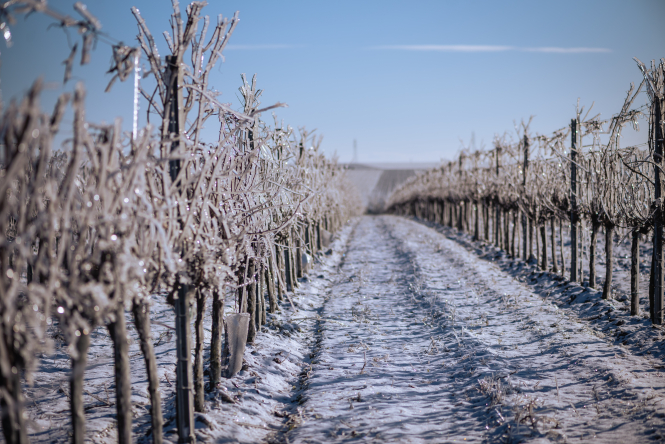 French winegrowers are waiting to find out if the recent cold spell has damaged their vines, as temperatures hit record highs over the weekend – but warmer weather is on the way this week.

The record for the coldest April night since 1947 was broken this weekend, forecaster Météo France said, after the mercury dropped to -9°C in the Champagne-Ardenne region (Grand Est) on Sunday evening (April 3).

Temperatures fell to zero or below across the country over the weekend, except for central Paris and the Channel and Mediterranean coasts.

️ It had never been so cold, on an April night, on a scale, since 1947 (creation of national thermal indicator).

Météo France forecaster Patrick Galois said: “It froze over 90% of the country and it was more intense in some areas. There was a big drop in temperatures overnight, but it’s warming up now quickly.”

Electricity grid company RTE even issued a statement asking people to ‘moderate their consumption’ of electricity today, as increased heating demand would likely strain the already ‘strained’ national grid. from the country.

Read more: Why the French are urged not to do their laundry today

Winegrowers: “It was simply too cold”

Winegrowers across France now fear the cold snap has damaged their vines.

Temperatures dropped from -3C to -7C in Bordeaux. The president of the AOC of the Bordeaux region, Stéphane Gabard, warned that these temperatures would be too low for the vines. He said: “From -2C we are already seeing damage.”

She added: “We will need support [from the state] because there is a disaster to declare.

“Too early to say”

Still, it’s “still too early” to tell if any permanent damage has been done.

Ms Lambert continued: ‘We cannot make an assessment yet as the damage is visible as it thaws.

Jean-François Galhaud, President of the Saint-Émilion Wine Council, said: “The buds were just beginning to open. We won’t have an idea of ​​the damage done until all the buds are out.

The damage could be less than last year, as the buds did not come out too early this season, unlike 2021.

Mr. Galhaud said: “Last year the buds came out a fortnight early. This year, the vegetation cycle was normal. But we must not go forward, we will not know more for a few weeks.

Winemaker Romain Garrigue told France 3: “We fear there will be another night of frost, so we have more contributions to pay. [But] we will fight until the end.

Another producer, Christophe Château, said: “Many winegrowers anticipated the frost, pruning their vines late, and working the land less to conserve heat.”

But some growers say they couldn’t save their crops, especially those who can’t afford to protect their entire property.

Valérie Arnathaud, said: “I thought I had saved part of my harvest, because it is near a wood that protects it, but the night was too cold.”

Daniel Dettling, a producer in Alsace, only has enough candles for one of his 16 hectares. He says: “We can’t protect everything, we don’t have the physical means, and it’s financially impossible.

Warmer temperatures on the way

Fortunately, the cold temperatures seen over the weekend will be the “last cold night for the next few weeks”, Météo France said, and warmer temperatures are on the way.

The forecaster explained that the very cold and thin air dissipates quickly as soon as the sun rises and takes very little time to rise.

While temperatures should now rise between 11 and 15°C across the country, this should bring some precipitation, especially in the Alps and the Grand Est, where 15 centimeters of rain should fall in a few days.

In the south-east, temperatures are expected to reach 20C by the end of the week – but wind and humidity mean “it may not be so pleasant”, said forecaster Gilles Matrico.