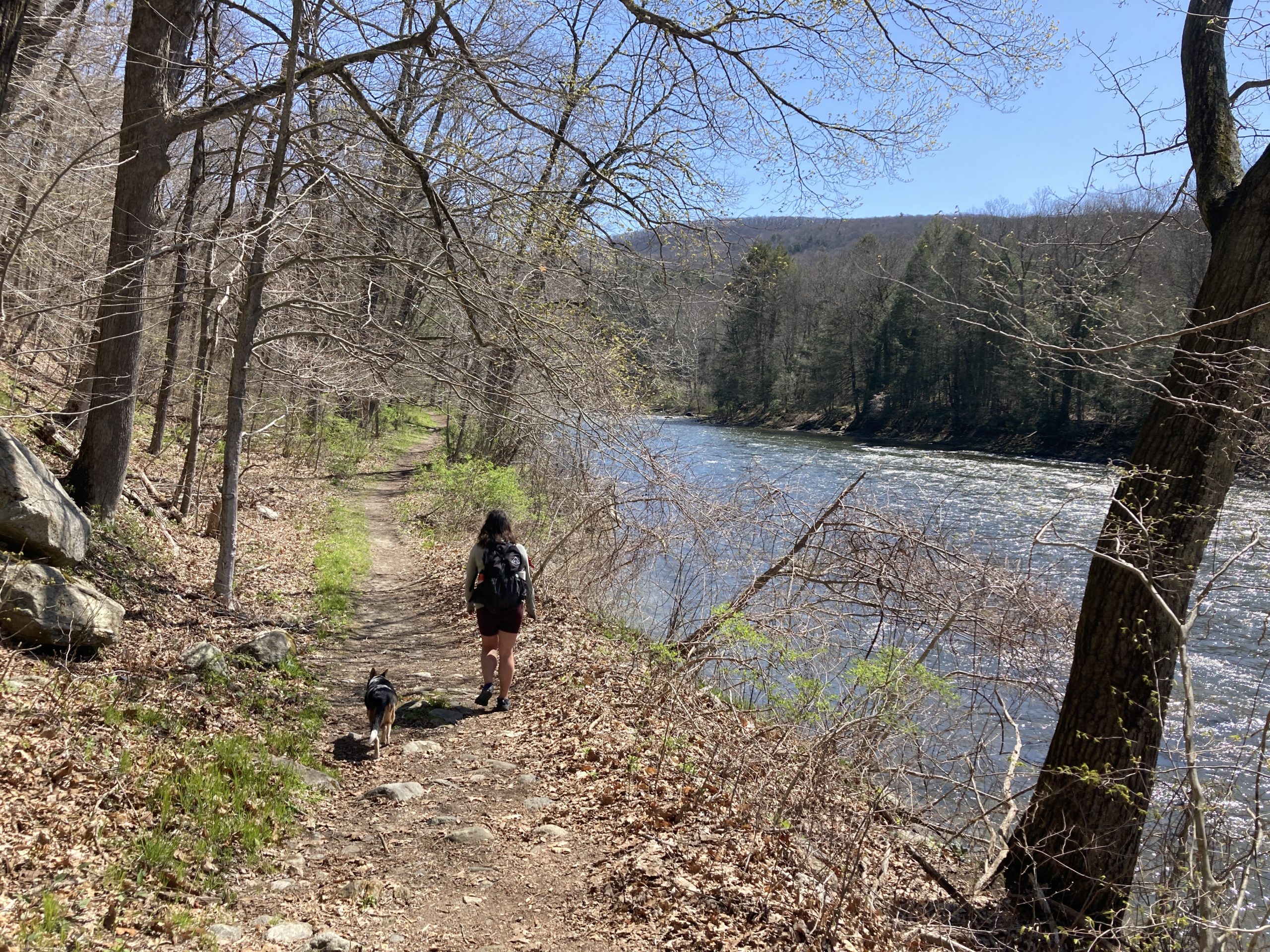 There may never be a more perfect spring day than the one I experienced today. Oh, that was so nice. The sun was hot, hot enough to make me sweat when I was working hard, and just as quick to dry me off after a cool breeze cooled me down again. There was not a cloud in the sky, and only the suggestion of the wind all day, as I cruised through the forest and along some of the most enjoyable river rides imaginable. Some classic steep climbs and subsequent descents tested my legs and balance, and overall it was an outstanding day with a rewarding mix of terrain. It also helped me to eat lasagna for breakfast and lunch. How could a day be anything but great with so much fabulous food?

I was awake before my alarm, which in some cases I find very comforting. Rolling over to doze for another hour was luxurious and indulgent, two rare adjectives on a hike. I didn’t feel any particular rush to get me back on the trail, so SpiceRack and I took our time with our morning tea. The day was already bright and warming as I sat with my feet up, making more macaroni salad, then some leftover lasagna. It was even better this morning than it came out of the oven last night, but I was only able to make a small dent, full as I was of mac and stuff.

By 10:30 am I was packed and ready to hike. The three days worth of food in my bag would get me another 75 miles further north to the next meet at the trailhead. By then, I’d be out of Connecticut and well into Massachusetts, another state with a hard-to-spell name. Spice and Tango joined me for the first glorious trail miles along the Housatonic. It was wide and flat, the morning glistening and bright. The fresh green leaves and tiny flowers at the edge of the trail left no doubt that spring was coming. The smell of hot dirt mixed with the smell of rushing water, brought back childhood memories of Easter camping trips to riverside campgrounds. They weren’t specific and weren’t anchored to any place or time, essentially a vague fiction that I clung tightly to as if that part of my life could evaporate if not memorized. Spice’s fast pace brought me back to CDT when I learned during the long drive to Anaconda that she could leave me in her dust if she wanted.

The other two turned back to the van after reaching the next shelter, and I continued along the river for a few more miles. Both the flat trail and the large body of water were easy to enjoy, although I felt like stopping at one of the many small beaches for a dip and a morning nap. Alas, I had already exhausted my modest quota of luxurious idleness for the day. I was just business, from now until bedtime.

My stuff and the trail diverted me from the river, heading me up a brutally steep climb. I would complain about it, except that I met a troop of scouts who had decidedly more trouble than me. Excess baggage dangled from the already massive scoutmaster’s backpack, and I recoiled in sympathy for every pair of denim jeans I saw. And I thought I was hot in my pantyhose! A slow, careful descent followed on the other side of the hill. The trail was steep, the rocks were big and the leaves were deep. At the bottom, I crossed a road, waded in Guinea Stream up to my shins, then back up the slope. The rock steep steps left me panting and soggy. Phew, they like it short and steep in Connecticut.

The trail stayed high for a few miles of pleasant forest meandering, eventually gradually plunging through creek-filled corners of deep shade of pine trees and mossy rocks. I sucked on a root beer candy to keep the juices flowing in the heat, but with water so plentiful, I didn’t have to worry about dehydrating as long as I stayed vigilant in my efforts to drink. hydration. I pooped for an unprecedented second time at the perfectly timed Cesar Brook Camp, then walked around the next bulges until lunchtime in another stormy creek. I made a short visit, but managed to filter the water and still eat a lot. The last of SpiceRack’s lasagna was the highlight for sure, and it refreshed my pizza-flavored burps for the second half of the day.

Another road and another stream, this one groomed by the beaver, sat where they are, at the bottom of the next hill. Where all those roads went, I had no idea, but there were certainly plenty of them. Another steep climb sat where this do, and I laughed out loud part of the way up when I was confronted with a startling jumble of house-sized boulders. I laughed a little harder when my gaze followed the white flames straight inside. Sure. A feature called Roger’s Ramp squeezed me through a crack in the stone to the top of the heap, no drama, no questions asked.

Plus, I sucked up more root beer candies and logged miles on a relatively easy trail. There were ups, downs and rocks, but never in concentrated amounts. I needed all my muscles to be ready at all times. Once my climbing legs were caught off guard, and they burned with the effort of a sustained climb after only a ten-foot ascent push. All the while, the sound of running engines grew closer. They were easy to ignore at first, I heard a lot of cars driving on those mountain roads, but eventually I wondered what was going on. The continuous orchestra of grunts of farts and downshifts of burps had gone on too long to be illegal. Every cop within twenty miles would have heard the cacophony. It was supposed to be some sort of race, but it seemed like a weird place for it. I was in the woods. Where was the race track? I finally caught a glimpse from a very high vantage point. Indeed, an uninterrupted stream of small spots followed one another in circles. My card said I was looking at Lime Rock Speedway. Who knew?

The sound eruptions had ceased when I reached river level again on the outskirts of a small town, called Falls Something Something. There, I hit the road again for a few miles, through the Housatonic, looking lazier than I remembered, and past a high school. A beautiful riverside path followed, this one through a forest of silent giants, towering pines that stood motionless, heard without speaking. The evening sunlight cast streaks of heat across the forest floor. I traded whistles with an invisible bird. High low low. What exactly we were communicating was a mystery to me, but the short conversation we shared was my favorite part of the day.

I crossed the Housatonic once more over a large iron bridge, wondering where all the water had gone. Upstream, the riverbed was a largely empty channel of smooth granite pools connected by a stream of water much too small to explain the signs of erosion. My answer came just a little later when I saw the dam. Water was still flowing from the impressive Great Falls, but I’m sure it was nothing compared to what had been. However, I resolved to return on a hot day. It looked like a dope place to splash and swim.

SpiceRack gave me a jingle and we talked for the last few miles to camp. She explained to me what her research on the Canadian part of ECT had revealed. Some good, some expensive, all exciting. One last view at sunset gave me the best view in several days. I gazed out over a wide valley lined with purple hills in the fading light. I was looking in Massachusetts, but that was the extent of my knowledge, and it didn’t matter. Beauty knows no boundaries.

I found the camp in the last minutes before dark. I sniffed the bag that had held the lasagna, wishing for more, but feeling satisfied with the beans I had instead. I downed a few Oreos for good measure, holding nothing back to end a day that had given me everything I could ask for.

This article was originally published on my hikefordays.com blog. Check it out for trip reports from my other hikes including CDT and Sierra High Route.

This website contains affiliate links, which means The Trek may receive a percentage of any product or service you purchase using the links in articles or advertisements. The buyer pays the same price as they would otherwise, and your purchase helps support The Trek’s ongoing goal of providing you with quality hiking advice and information. Thanks for your help!

To learn more, please visit the About This Site page.