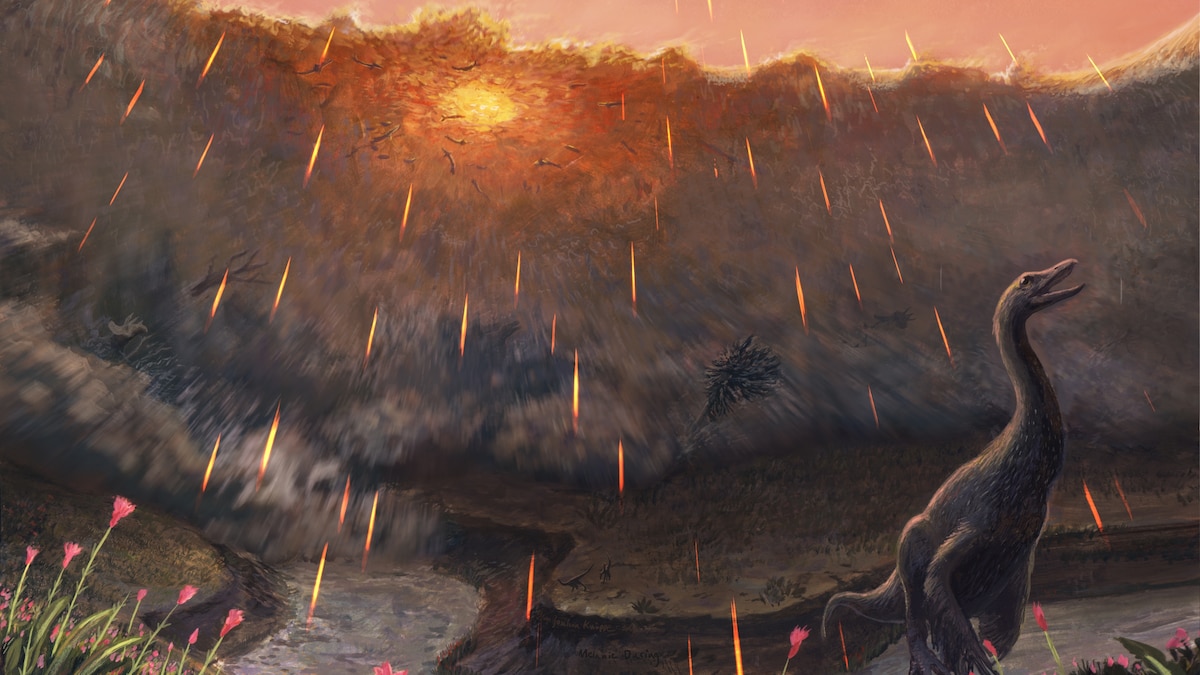 A dinosaur-killing asteroid likely hit in the spring

The impact that ended the age of the dinosaurs about 66 million years ago was the worst day life on Earth has ever endured. A six-mile-wide asteroid called Chicxulub slammed into the waters off what is now Mexico, triggering a mass extinction that killed more than 75% of Earth’s species.

Earthquakes of unfathomable power shook and rolled the planet’s crust. Tsunamis over 150 feet tall hammered the shores of North America. Wildfires ignited hundreds of thousands of miles from the impact site, ignited by the searing heat from the asteroid’s initial impact plume and the torrents of debris that followed.

Hundreds of sites around the world preserve the remains of this cataclysm, but at an unusual site in North Dakota, fossil fish that appear to have died less than an hour after impact hold crucial information: life on Earth suffered this devastating blow on a fateful spring day.

The growth patterns of fossilized fish bones, described in a new study published in Nature, suggest that they perished just as their growth accelerated from an abundance of food, consistent with spring death. The new findings also add to growing evidence that Chicxulub’s impact was a worst-case scenario.

After the initial calamity, life on Earth faced a horrific “nuclear winter” that persisted for months or even years after impact, the phase of the extinction event that claimed the most casualties. . The gases and particulates were blasted high into the atmosphere and blocked out the sun, causing temperatures to drop more than 60 degrees Fahrenheit and cut Mesozoic ecosystems knee deep.

But if the asteroid really hit in the Northern Hemisphere’s spring, many creatures there didn’t live long enough to cope with this global darkness: in the spring, most of the flora and fauna of the hemisphere would have been in search of food and mates. Meanwhile, southern hemisphere animals would have prepared to retreat for fall and winter, perhaps giving them a slight advantage in the initial phase of the disaster.

“If you don’t survive the impact, you don’t even have a chance of fighting through nuclear winter,” says the study’s lead author, Melanie Pendant, who holds a Ph.D. candidate at Uppsala University in Sweden. “I don’t think you could have picked a worse season.”

The study is the latest to examine exquisite fossils from the site in Tanis, North Dakota, where sturgeons and paddlefish were killed and buried en masse. Debris embedded in the fish’s gills suggests it died about an hour after impact. A New Yorker article of 2019 describes many other fossil treasures at the site that have yet to be scientifically published. (Read more about the fossils on the Tanis site.)

The site, named after the “lost” ancient Egyptian city, sits on a private ranch in a tiny outcrop of the larger Hell Creek formation, a series of rock layers that record hundreds of millennia leading to extinction dinosaurs. In 2017, Pendant, then a master’s student at the Free University of Amsterdam, visited Tanis with a team consisting of Jan Smit, a paleontologist at the university, and Robert DePalma, the paleontologist who was leading the excavations on the site.

According to Smit, this part of North America 66 million years ago was a river valley carved more than 33 feet deep into the surrounding floodplains. When Chicxulub struck, the impact triggered powerful tremors that rushed through the continental crust and reached Tanis within 15 to 30 minutes. The shaking earth sent waves from an inland sea upstream towards the site of Tanis, quickly burying anything in the water at the time.

Meanwhile, debris from Chicxulub flew high into the atmosphere and coalesced into tiny glassy blobs. These particles, called tektites, began raining about 15 minutes after impact. Remarkably, the Tanis sediments retain funnels dug into the ground by tektites from above. The fish also have tektites embedded in their gills, but nowhere else in their digestive tract or body, implying that these fish died right after the tektites started raining down the river.

Evidence of this destruction can be found throughout the site. In a layer of sediment, the fish are all facing left; in the next layer, they all face to the right, as if the fish had been tossed and buried as the crashing waves repeatedly advanced and receded. “I keep comparing it to a huge traffic accident disaster and then just freezing in place,” says Pendant.

Pendant and Smit returned to the Netherlands with several sturgeons and paddlefish from the Tanis site, where they set to work analyzing the bones. Some bones of these fish grow in layers over time, much like tree rings. By analyzing clues in these layers, their team hoped to determine the season in which the fish were dying.

This video, rendered using X-ray data from the European Synchrotron Radiation Facility, reveals the fossil skeleton of a paddlefish from the Tanis site. Two black and white spheres mark where the fish’s eyes would have been.

The filter-feeding paddlefish, for example, has preserved changes in its food chemistry. The photosynthetic plankton they ate is more productive in spring and summer than in fall or winter. As the productivity of plankton increases, so does its amount of carbon-13, a slightly heavier isotope than the much more common isotope carbon-12.

By analyzing the chemical composition of each layer inside a paddlefish bone, Pendant’s team discovered that when the paddlefish died, its carbon-13 values ​​were on the rise but had not yet peaked. , sign of a spring death.

The team also analyzed bone growth patterns. Using Europe’s synchrotron radiation facility in Grenoble, France, a particle accelerator that produces the brightest X-rays in the world, Pendant and his colleagues performed CT scans of these bones. Their objective: to analyze in great detail how the microstructure of the bone varied over the seasons.

In spring and summer, when food is more plentiful, fish grow faster, making the bone deposited during these times more spongy and porous. During the lean seasons of fall and winter, fish growth slows, leaving behind telltale solid layers called “arrested growth lines” in the bones. Pendant’s team measured this change from the inside of the bones to their youngest outermost layers. Result: all the fish died during a resumption of their growth rate which had not quite reached its maximum, a period compatible with spring.

With two data sources both pointing to the same season, the researchers are more confident in their conclusions. “That’s why I think our study does an exceptional job of narrowing it down to just one season,” says study co-author Dennis Voeten, a researcher at Uppsala University.

The new Tanis fish study isn’t the only such research: In December 2021, a separate team led by DePalma published its own. analysis of the season captured in Tanis in the newspaper Scientific reports. The two papers rely on different fossils and use different techniques, but they come to broadly similar conclusions. DePalma’s results suggest that Chicxulub struck in the spring or summer, consistent with Pendant’s more limited finding of a spring impact.

“We welcome independent research and analysis, and we’re excited that these projects will complement each other to lead to a richer understanding of the prehistoric world,” said DePalma, a Florida Atlantic University professor and Ph.D. candidate at the University of Manchester, said in an emailed statement.

The authors of the new study hope the data will feed into further analyzes of how the extinction event at the end of the Cretaceous period unfolded. For example, tentative signs from a few Southern Hemisphere sites suggest that after Chicxulub, the Southern Hemisphere recovered about twice as fast as the Northern Hemisphere. How might this signal be affected by the season of impact?

Kirk Johnson, director of the Smithsonian’s National Museum of Natural History, notes that while fish from Tanis undoubtedly show a seasonal signal, Earth 66 million years ago had less dramatic seasonal oscillations than the planet. of today. Back then, there were no permanent polar ice caps, and deciduous forests stretched to the poles. As a result, he wonders what advantage the flora and fauna of the southern hemisphere would have had in surviving the immediate consequences of the impact.

“Better to drop the bomb when you’re already in your bomb shelter than when you’re fixing your roof, that’s kind of the principle,” says Johnson, a paleontologist who specializes in the formation of Hell Creek. “[But] I think people making that argument don’t think about how little seasonality there was in the Cretaceous – so it matters less, but it probably matters a little.

Johnson adds that future research could test this idea. With Tanis now serving as a benchmark, Johnson and others are reassessing other sites in the Hell Creek Formation, looking for similar deposits that could also preserve the day the dinosaurs died in such stunning detail.

“We’re all the better for finding Tanis because it’s something unusual,” Johnson says. “They opened a window we hadn’t thought of.”